I’ve just spent 2 days at the on the Gold Coast where I got to try out Google Glass at ProBlogger 2013. I have wanted to go to Darren Rowse’s event for several years, but this was the first time I made the effort to go. And boy am I glad I did.

Apart from the line up of terrific speakers, great food, great hotel etc, it was getting to try on Google Glass that really made it special.

I’m a bit of a techno geek and I love to have the latest gadgets and tools to make life easier, but Google Glass takes that to a whole new level.

What you can do with Google Glass

As well from having the ability to make phone calls, you can also; 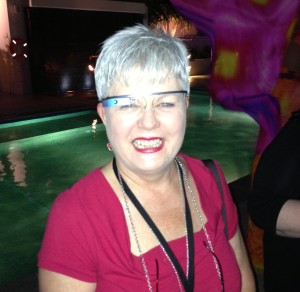 So what’s the big deal I hear you say, I can do that now on my phone. But the difference is that you are wearing this device – just like a pair of glasses, so it’s all hands free! The guy who was wearing it – Trey Ratcliff referred to as a “wearable computer” and that really describes it well.

As you can see in my photo, Google Glass looks a bit like a pair of normal glasses and Google say that we will eventually be able to get it built into our regular glasses, so it will look completely normal – now it looks like something out of Star Trek, which is probably why I loved it so much, I’m a Trekkie fan from way back in the 60’s (beam me up Scottie).

Having Google Glass at ProBlogger created a real buzz amongst the crowd and at the fab party “This is Queensland” hosted on Saturday night, everyone wanted to try them out. I was lucky enough to have a go too.

I could really get used to “wearing a computer” it would really take things to the next level and make happen just one of the crazy things the internet has made possible. Take a look at this video to see “How it feels”

And this shows you “What it does”

The good and the bad.

But of course it might not always be good, when I explained it to some of my friends they weren’t so sure about it. For example; if you have small children, what’s to stop some weirdo just taking pictures of them – or even videoing them? You wouldn’t have a clue they were doing it.

This whole Google Glass project is fascinating and just another example of how Google are always pushing the boundaries and developing amazing new things. But I guess, like everything – technology comes with a price – I don’t mean the dollars, I mean it changes things, it can make our lives much better in many ways, but it could also make it harder and a bit scarier.

Anyway, thanks Trey for having Google Glass at ProBlogger this year – I wonder what exciting things are in store for next year’s event?

What do you think? Would you wear a computer?

Leave a comment and let me know how you feel about this.